The total bacterial count (TBC) test kits are dedicated to aerobics bacteria. The extra ordinary colony of these bacteria in industrial water lead to produce bio films which can cause several technical problems for the system. The overall detection of those bacteria and their amount inside the water can give us this opportunity to prevent their extra ordinary growth and creation of huge bio films. By using the laboratories kits of TBC, the total number of aerobics bacteria inside one sample of water can be determined. This kit is composed of a hygienic layer of specific culture medium for growing variety of bacteria inside a hygienic glass container. TBC kit has been produced based on API standard and it is being used in several industries. 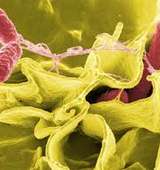 SRB (Sulphate Reduction Bacteria) test kits are dedicated to detection of sulphate reduction bacteria. SRB is the most harmful industrial bacteria. These bacteria reduce the environmental sulfate biologically and the final product of his reaction is sulphide ion. The laboratory kit of SRB is being used for recognizing variety of sulphate reduction bacteria such as Desulfovibrio, Desulfobacter and etc which is designed based on API for both solid and liquid environment. With these kits the microbial corrosion in cooling towers and heat exchangers can be anticipated and microbial corrosion can be prevented. 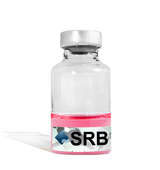 One of the other problematic micro organisms in cooling towers is ferrous bacteria. The ferrous oxidizing bacteria are aerobic and produce a lot of mud. These bacteria oxidize bivalent iron to trivalent iron and then wrap around the cell wall. To determine antimicrobial susceptibility of different microorganisms in case of facing to a biocide, the MIC (Minimum Inhibitory Concentration) method is used. MIC means a minimal concentration of a biocide can inhibit the microorganism growth in vitro. The diagnosis kits of legionella bacteria are the kits for diagnosis of Legioner disease cause (a respiratory disease). These bacteria are widely distributed in nature and one of sources of is cooling towers. This disease ranges from mild and non symptomatic to severe and dangerous and in some cases, it causes to death. The nitrite degrading bacteria diagnosis kits are being used more in closed circuits (chillers) and also in case of using nitrite based inhibitors. These kits are being used for diagnosis bacteria that destroy the nitrite-based inhibitor. The nitrifying bacteria are those bacteria supply the required nitrogen for growth and regeneration from NO2 nitrite. This group of bacteria is very harmful for nitrite based corrosion inhibitors. It is because of decomposition of nitrite to nitrate and finally neutralizing the inhibitory effect. Currently, the only producer of these kinds of kits (nitrifying bacteria diagnosis kits) in Iran is MBA Company. Another problematic micro organism in cooling towers is funguses. The funguses by fermenting the organic materials in presence of oxygen produce organic acids and cause destruction and corruption of wood and by forming non aerobics situation help the growth of SRB. 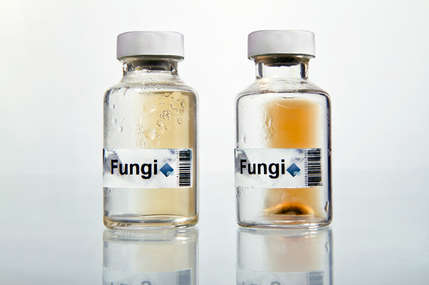